This past Sunday Rudy and I finally took the Rail Runner to Santa Fe, just to fart around for the day.  After about 90 minutes and 4 stops we arrived.  We were told that the shuttles around town don't run on Sunday, so we were left to trek to the Plaza on foot...which was fine except that it started snowing (hard) as soon as we got off the train.

Our first stop was just a short walk down the street to Zia Diner catch a bite and warm up.  We then made our way to the Plaza and we see a Five and Dime store.  Again, we need to warm up and dry off a bit.  I had a hat and scarf, but no gloves...so I find a great little pair of purple gloves for $3.99.  Hey, you can't beat that right?

Next, it's on to the La Fonda, where I want to check out the Ballroom where my table will be at the Santa Fe Bead Fest in a few weeks.  We were lucky enough to have a nice security guard open up the Ballroom so that I can take a peek.  I had been there some years ago, but it looks different.

We rested in some wonderfully comfortable big leather chairs in the lobby and wondered what we wanted to do next.  We had about 5 hours to kill.  We cross the plaza over to the Palace of the Governors to look at the Native Americans selling turquoise jewelry on the ground as they've done for almost 75 years. 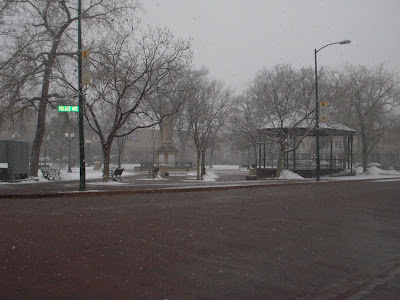 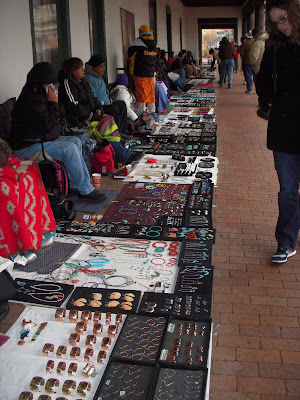 Around the corner we find the New Mexico History Museum which just opened last May.  It's an incredibly gorgeous museum and one that you should definitely see when in Santa Fe.   If you get a chance go before the Fashioning New Mexico exhibit leaves on April 10.  The wedding dresses were just mesmerizing.  I got lost imagining the lives of the people who wore these lovely costumes.  Rudy had to go and sit it out, I just didn't want to leave!

Again, we talked to a really great security guard at the museum, who directed us across the street to warm up in a sweet little bar at the Inn of the Anasazi.  Couple of beers later and we were back outside.  The snow has finally stopped.

Time to find Rudy's college roommate Nick who he hasn't seen in about 30 years.  He owns a bar called Evangelo's.  It was so funny to listen them talk about the old crazy college days.  A portion of the movie Crazy Heart with Jeff Bridges was filmed at his bar.

We are down to about 2 hours until the train leaves for Albuquerque and we've worked up quite an appetite.  So we decide to walk back towards the Santa Fe Depot and we find a cool place that is across the street from Zia which was our first stop at 11:30 that morning.  It's called Cowgirl BBQ...thought we could catch the Olympic hockey game on the big screen, but they weren't playing yet.

With only about 45 minutes now before the train pulls in we decide to go and have apple pie and coffee at The Flying Star.

What a day...whew!  Exhausted, but happy!

I'm thinking about all of my clay friends traveling to Baltimore for Synergy2 this week.  I so wanted to join you guys, but I'll be following all the fun on Crafthaus where Cynthia Tinapple of Polymer Clay Daily and Libby Mills will be live blogging for the event.  Can't wait for pictures too, so don't let me down peeps! ;o)

Hope you all have a blast!!
Posted by Barb Fajardo at 10:42 PM 3 comments: Links to this post

I always have trouble coming up with a blog post, which is doubly hard for me because I'm a terrible typist.

But, I have been on a bracelet making binge and I had a weird dream last night.  I'm hoping if I tell you about the dream, it will help me figure out if there is a connection between the two.  LOL, just for fun you know...

I'm with some old friends (think 20's when we used to party every weekend, no clay friends)...they had rented this enormous house in a gated community that was at the very top of a winding trail of ups and downs, steps and ramps. It took quite a while to get there...going along narrow ledges and crumbling steps.  I feel like I'm in Spain.

We finally get to the fabulous house which is like a long southwestern ranch spread, one story with lots of space.  Some people are relaxing in about 6 claw footed bathtubs (weirdest part for sure) on different levels of a sunroom with lots of hanging ferns.  There is sumptuous ochre leather furniture, a roaring fire (although it is summer outside) and a Spanish tiled kitchen.

So, I walk through the house putting my purse in one of the back rooms.  I'm kind of disgusted because the house is a mess...not with trash, but just junk everywhere.  A house this beautiful should be kept nicer.

When we leave, neighbors are partying in swimming pools and on decks at some of the houses we pass on the way down.  Again, we are winding up and down steps, and around winding curves.  About half way down we stop to chat with people.

Then I remember that I left my purse, go back by myself and wonder if I can even find the house again. None of the houses looks familiar so I circle around, go back, take different turns like I'm in a maze.  Finally, I end up at a dead end and then I wake up!

Strange, huh.  It really was a pretty and colorful dream though! 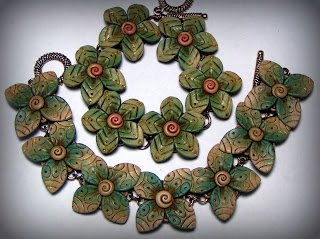 Posted by Barb Fajardo at 3:08 PM 3 comments: Links to this post

I'm happy to announce that I'll be showing at BeadFest Santa Fe this March!  The Show is at the new Convention Center and at the La Fonda Hotel.  I'll be in the La Fonda Ballroom booth #27.  I'd love for you to come by and say hi if you attend the show.  Santa Fe is beautiful in the springtime and the show promises to be as gorgeous as it was last year
.

I need to let you all know that most of the unsold merchandise here on my site will be taken with me to Santa Fe, so if you've been looking at some beads or jewelry now is the time to purchase them.  I will keep everything here until Sunday, February 28th.  After that what's gone is gone!

Happy February to you all.  Here's hoping that Punxsutawney Phil doesn't see his shadow tomorrow ;o)

Posted by Barb Fajardo at 2:52 PM 3 comments: Links to this post