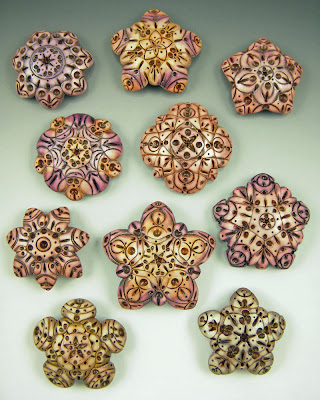 Mine is low...my attention span that is.  Art ADHD?  I think I have mentioned this "condition" in previous posts.  But, I think my creativity is pretty high.

I'm not a class taker...I'm mostly self taught.  My attention flits from idea to idea and I can't take long to see a piece(s) come to fruition.  If it takes an extra amount of concentration, I can't do it.  I think that's why attending "in person" classes aren't my thing.  Even with books, I tend to flip through them quickly, mostly looking at pictures and rarely taking the time to do a project.   I think it's a blessing and a curse...

I'm not a project person, I'm all about technique.  I change around my work fairly often, because I become bored fairly often.  I use what I know and expand on it. My inspiration mostly comes from inside me.  I like it that way...

My Textured Tile Tesselations class is rather short and simple for the price ($30), but I think it's worth it.  It's a new technique class...it's meant to make you see how you can use the new technique in your own work.  If you've taken "TTT" and want to discuss or ask anything...the hows. the whys. the what ifs.  Please, please talk to me!  Email me at barbfajardo(at)gmail.com, join my classroom or use the option in the class to ask a question, either privately or publicly.  I'm here for you any time...that's why CraftEdu classes are the next best thing to real live classes.

I will be adding some new content for those of you who have already purchased TTT and have views remaining.  It will touch on the round domed beads and how I use alcohol inks for color.

I'm working on proposals (yes, I know you've heard that before) to share some of what I've learned along the way.  Check my new website which will keep you updated. I've outgrown my old domain name and have found a web host that is about half the price.  I'll probably be shutting down the old site by August or September 2011.


So you have an idea where I'm coming from...my son Daniel graduates (Mechanical Engineering) from college this year and next year wants to leave NM for his Masters.  My youngest Evan, will be a junior at UNM next year (Computer Science) and will probably be moving out soon (he's rarely home as it is).  The boys have their own friends, even though they still like us :-)


That's where I'm at in my world.  Sorry for the unusual length of this post, I've been lax so I figure long is better than not at all!
Posted by Barb Fajardo at 12:09 PM 5 comments: Links to this post